How Mondeuse came to be growing on a volcano 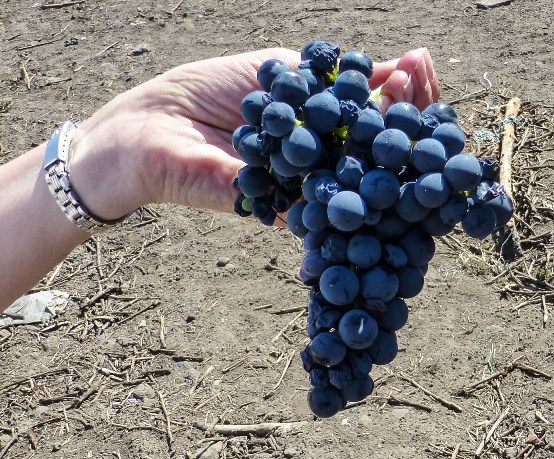 How Mondeuse came to be growing on a volcano

When 15 years ago the owners of the Cottanera wine estate in Sicily’s Etna region discovered they had been sent 14,000 vines of Mondeuse as part of a consignment of French varieties purchased from a French vine nursery, they were not well pleased. After all, no-one knew then that Mondeuse was a close relative to Syrah, and at the time most Savoie Mondeuse wines were written off as light reds to enjoy on a ski holiday.

The wine world is slowly waking up to the news that Mondeuse, along with Savagnin from Jura, Teroldego from Trentino and Rèze from Switzerland, plus a few more familiar names like Nebbiolo and Cabernet Franc, have been dubbed by Jancis Robinson, ‘founder grape varieties’. With the forthcoming launch of the new Wine Grapes book by Jancis Robinson MW, Julia Harding MW and grape geneticist José Vouillamoz, the world of grape varieties may never be the same.

I was lucky enough to be present at a modest event in Savoie, when the Centre Ampelographie Alpine Pierre Galet was launched, at which José Vouillamoz revealed that he had discovered Mondeuse to be either the grandparent or grandchild of Syrah. And, it was indeed Syrah that the Cambria family of Cottanera in Etna had ordered.

Back in 1997, the late Guglielmo Cambria of Cottanera was persuaded by the late Gilbert Bouvet, who ran a well-known vine nursery in Fréterive, Savoie, exporting grafted baby vines across France and worldwide, to accept the 14,000 Mondeuse vines because the nursery did not have sufficient Syrah to complete the shipment. Gilbert Bouvet also ran a wine estate (that was taken over from the family after his death), and was one of only a few growers at the time to make Mondeuse that was aged in oak and destined for ageing. Cannily, Bouvet promised Cambria that once the first Etna Mondeuse had spent one year in barrel, he would buy all the stocks from Cottanera if they did not like the results. He didn’t have to, and in 1999 Cottanera l’Ardanza was born.

Etna: a mountain wine region
“A Muntagna”, as Mount Etna is affectionately referred to in the Sicilian dialect, changes the surrounding landscape on a regular basis with its frequent eruptions, and it seems that Etna wines have also changed often in the course of their long history. Sicily was and remains a very large producer of wine, but as in so many challenging mountain areas around Europe, with its relatively high production costs, the Etna region has moved almost completely towards quality production out of necessity.

Despite the large island of Sicily lying not far from the northern shores of Africa, the climate on the volcanic lower slopes of Mount Etna (whose peak is around 3,340m, but varies!) is a modest Mediterranean one, with plenty of breezes, and significant diurnal temperature differences. As in most mountain areas, altitude and aspect both play a key part to each individual vineyard’s microclimate.

When in the 1990s brothers Guglielmo and Enzo Cambria decided to plant vines on the land their father had farmed since the 1960s, initially they decided to plant international – ergo French – grapes, because at that time this was considered the best route to market for quality wines. Later they planted Sicilian and traditional Etna varieties. Now with 55 hectares, currently the largest producer on Etna, they make a well-respected range of IGT and DOC wines, both from single varieties and blends.

I had heard about Cottanera’s Mondeuse from Michel Grisard, the Savoie grower in Fréterive. And in truth this was my main excuse for accepting the generous invitation of the Etna DOC and Catania Chamber of Commerce to join the first ever Bloggers’ visit there organized by Fermenti Digitali. The second, related excuse was that Etna wines are deemed to be ‘mountain wines’ and the region is a member of CERVIM – the Aosta-based organisation dedicated to research into mountain viticultural. Thirdly, I had never visited Sicily. So, how could I possibly refuse?

To be truthful, Cottanera’s vineyards, albeit at an altitude of 600-700m and thus well within the Etna DOC’s designated altitudes of 400-1000m, were actually some of the lowest of the many vineyards we saw on our 3 ½ days of intensive tastings and visits. They are on the north side of Mount Etna near the village of Castiglione di Sicilia, where the vineyard slopes, albeit often terraced are less steep than on the east and south sides. Whereas all the Etna soils are volcanic and extremely complex with a rich level of minerals, on the north side they are moister but also richer in organic material, which works well for some vine varieties, not so well for others. As in all of the Etna DOC no irrigation is required and labour is principally manual.

Enzo Cambria took me into the Mondeuse vineyards (about two hectares), trained on an espalier (VSP) system and they seemed vibrant and extremely vigorous to say the least. He confessed that the variety took to its new home so readily that the ongoing problem has always been its large production. They always summer prune, reducing the crop by 50% and often remove the ‘wings’ from the very large grape clusters to reduce crops still further. The 2012 growing conditions on Etna meant harvest taking place about 10 days earlier than normal, and the Mondeuse had been picked in early September, before we arrived, but I was able to find a bunch (see photo at top) still hanging from a secondary growth and even this was a big bunch, not surprisingly tasting rather unripe, but nevertheless looking like the typical Mondeuse bunch form.

I tasted the 2008 Cottanera l’Ardanza (labelled IGT Sicilia as not surprisingly Mondeuse is not a permitted variety for the Etna DOC), once at the winery and again at home in the Alps. It shows a deep colour, and red fruits, with some floral character on the nose, but with, not surprisingly, a warmer richer character than what I expect from Savoie Mondeuse. Spicy oak was prevalent both on the nose and the palate, though this is offset by good fresh acidity and soft tannins on the palate. You would never find alcohol of 13.5% in Savoie; the maximum that it reaches there before chaptalization is 11.5% and that is rare, however, the higher alcohol did not detract from the Mondeuse flavours as much as the obvious oak flavour, which I don’t think suits the variety. L’Ardanza has malolactic in barrel and was aged in 30% new oak and 70% 2nd use oak for six months. This vintage won two bicchieri – a worthwhile recognition from the Italian Gambero Rosso guide – as have some previous vintages, and the wine is enjoyed and rewarded in the USA too. I gently suggested to the younger generation of the Cambria family who manage the winery with Enzo that an experiment with older and bigger barrels as used for their Etna Rosso from Nerello grapes, might be worth trying.

An unpopular and unrealistic proposition
Purists would say: leave Mondeuse in Savoie, it shouldn’t be grown anywhere that is not its traditional home. For the record, Mondeuse is also grown by Brown Brothers in Victoria, Australia who received it amongst many mixed vines more than 60 years ago, and use it in a successful blend with Syrah and Cabernet. And it is grown by grape geneticist Carole Meredith in Napa, California. I have tasted the Lagier-Meredith Mondeuse, and whilst showing that tell-tale red fruit character, it did not have quite the freshness shown even by the Cottanera wine. Finally, Mondeuse is enjoying a minor revival in Switzerland where it was once quite prevalent in the past – I plan to taste a range soon.

I believe experimentation with growing grape varieties away from their homeland even in Europe is always interesting, and in the case of rare grape varieties it is a way of understanding more about the grape as well as preserving plant material. Given that today there are several fine and ageworthy Savoie Mondeuse wines, very different to its progeny Syrah or indeed any other variety I know, then it makes sense for other regions to try it, most especially in mountain vineyards. I asked Enzo Cambria whether any other Etna producers had asked Cottanera for cuttings. He laughed and said no.

Mixed red and white varieties in the highest vineyard on the slopes of Mount Etna, managed by I Vigneri ©Wink Lorch

On our visit we saw several vineyards at altitudes from 800–1,000m and one (outside the DOC area) at 1,300m, likely to be the highest vineyard on Etna and indeed Italy. Most of these vineyards had very old vines (100 years old and more), grown in the traditional albarello (goblet or bush vine) system, tied to a post, just as old Mondeuse is trained on steeper slopes in Savoie. These old Etna vineyards often contain mixed vine varieties – with some still awaiting identification. The main grape is the increasingly well regarded Nerello Mascalese, whose wines to me hover between Burgundian Pinot Noir and Piemontese Nebbiolo in style, but when blended with other varieties show an Etnean character all of their own.

I’d love to see an Etna wine from Nerello Mascalese blended with Mondeuse and I’d love to see Mondeuse grown at higher altitudes on that rich volcanic soil, but with yields kept as low as possible. For now, Cottanera l’Ardanza stands proud as one of but a handful of Mondeuse wines grown outside Savoie, not labelled as such, but an excellent wine in its own right. I have two further vintages carefully stored to share with Savoie growers and other supporters at the Centre Ampelographie Alpine’s next annual general meeting.

My thanks to the Etna DOC Consorzio who financed my visit to Etna and to Fermenti Digitali for organizing the visit so well before, during and after. Links to other bloggers’ stories of our Etna visit can be found on the Etna Wine Bloggers Tour website along with a wealth of other information about Etna wines.