How Persan found a new lease of life 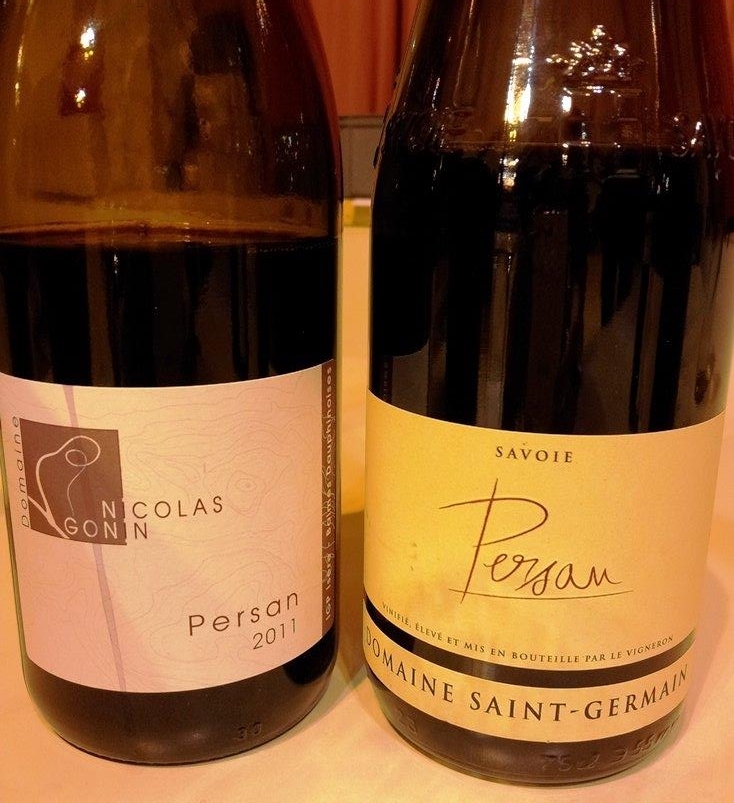 How Persan found a new lease of life

In the past few months the unusual Savoyard grape Persan attracted attention from American wine lovers in New York and from Vinocamp – the French social media and wine meet-ups. It’s as if there is a rare Alpine grape ripple effect, or perhaps a wonderful spider’s web in which wine professionals and geeks tiptoe around hoping to catch the latest forgotten or rare grape variety.

Back in October a few days before I was due to attend Vinocamp Savoie, a meeting of mainly French wine and social media fans at the Maison de Savoie in Apremont, my friend Arnold Waldstein in New York tagged me in a picture of a bottle of Domaine St-Germain Savoie Persan. It made me smile for there are currently less than ten hectares, or 25 acres in production of the Persan grape, split between several producers.

I first heard about Persan some years back from Michel Grisard, the energetic Savoie vigneron of Domaine Prieuré St-Christophe, who has devoted the past three decades of his life to various projects including ones to ensure traditional varieties historically grown in Savoie and beyond are properly preserved and recognized. He is currently the president of the Centre Ampélographie Alpine Pierre Galet (CAAPG), Centre for Alpine grape studies named for the author and eminent 20th century grape scientist Pierre Galet, and an organisation that goes from strength to strength.

Persan was once one of the most planted grape varieties in the Isère department, and also in neighbouring Savoie on the south-facing slopes of the Maurienne valley, which runs east of Grenoble through St-Jean de Maurienne to the Fréjus tunnel, a gateway into Italy.

At a small festival in the rain early last October to celebrate the harvest of Persan recently planted near Princens, thought to be where the grape originated, I learnt how the vineyards all but disappeared from the Maurienne valley partly in the wake of major pollution issues after the 1950s connected with the valley’s huge aluminium industry. The pollution lasted till the 1980s and ironically today, as a group of enthusiasts are reviving old vineyard plots and re-planting new vineyards, alongside plantations of another traditional local product, saffron, the Maurienne valley is most concerned about losing the giant aluminium producer Rio Tinto and the subsequent unemployment. Solid’Art Maurienne the group responsible for the revival of both the saffron and the vineyards are a group that link cultural and traditional activities with providing employment to disabled people, a worthy organisation led by Yves Pasquier.

The first Savoie Persan that I ever tasted was made by Domaine Grisard (run by Jean-Pierre Grisard, brother of Michel) in 2001. Doubling as a nursery, Grisard sold cuttings to other growers and now, as well as a few blends, you can find at least four other pure Savoie Persan wines, most notable in quality that from Domaine St-Germain and from Adrien Berlioz of Cellier de Cray. There are also several IGPs (the former Vin de Pays category) from Isère, particularly good is that of Nicolas Gonin (IGP Balmes Dauphinoises). The grape gives wines of deep red colour, with a corresponding inky and dark mulberry fruit, sometimes herbal nose with a well-structured palate that can be overly acidic if not handled well. Persan is certainly as interesting as the main indigenous Savoie red grape Mondeuse, in terms of both quality and ageing ability. According to Wine Grapes, Persan is identical to the just as rare Bécuet grown in the Val du Susa in Piemonte and part of the blend making up the delicious Ramié from Daniele Coutandin.

At one of the discussions at the Savoie Vinocamp a few local winegrowers joined the wine bloggers and social media experts to discuss how Savoie could raise its profile through social media. It turned out that hardly any producers were on Facebook (Michel Grisard, an honourable exception) and they had not realized how important this medium was, in particular for communicating about Savoie beyond France’s borders. I told my story about the photo of Persan (which many Vinocampeurs had never tasted themselves until later that day) on Facebook, and how I believed – and someone else confirmed – that there were more Savoie wines available in New York than Paris. I think it set Savoyard minds turning … slowly.

Rare grapes postscript
Some of the Persan wines I tasted recently were at the very stimulating Rencontre Ampélographique (grape variety encounter) after the annual general meeting of the CAAPG earlier this month, at which both José Vouillamoz and Pierre Galet (now 93) were present and speaking.

Interest in rare grapes is taking on real momentum right now, encouraged partly I believe by the appearance of José, Julia Harding and Jancis Robinson’s new Wine Grapes book, but also by several independent initiatives being set up around France and beyond, with whom the CAAPG maintains friendly links.

One such is Wine Mosaic established by Jean-Luc Etievent who also went to EWBC in Turkey, as did José Vouillamoz, and where we all had the pleasure of discovering the fabulous heritage of rare grapes in Turkey as well as hearing José, together with Dr Patrick McGovern discuss the origins of vitis vinifera. Wine Mosaic has a focus on rare Mediterranean grapes and hopes to stage a symposium on this theme in Porto in the autumn. Another is Cépages Modestes, an annual get-together orchestrated by a group of keen wine amateurs and supported by Gaillac vigneron Robert Plageoles. Their next meeting is also in the autumn.

The theme of the CAAPG meeting was about grape conservatories around the world and how to raise awareness of their existence with wine consumers. Many exciting initiatives are happening in Europe, though some sadly are hampered – especially in Italy – by financial constraints.

Through Facebook I learned this week from Nicolas Gonin, Vice-President of CAAPG that the Isère Agricultural Office is providing a trainee to help work on re-establishing plantings of some of the rarest and most recently discovered grapes in that region. Of course, raising awareness of these issues can and does to an extent happen through social media – thank goodness some #WineLovers at EWBC encouraged José Vouillamoz onto Twitter!