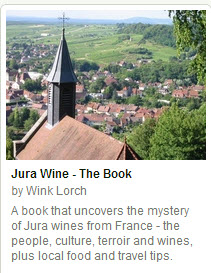 Today I received a transfer of approximately £12.5k into my bank account accumulated from 375 people who had pledged to the Kickstarter project I ran recently. The project was to raise funds for the production of my book Jura Wine that I will self-publish early next year. Some of the people who pledged are friends or colleagues personally known to me, many I know only slightly or ‘virtually’ through social media; many others are complete strangers – I don’t even recognise their names. They come from all over the world.

All who pledged presumably have a strong belief in either me, in the Jura wine region, in the future of wine books, or maybe all of these things. Not only did they believe that the Jura wine book should be supported, they were persuaded to get out their credit cards, in many cases through a system they had not used before – whether they understood what they were doing or not, they were part of an exercise to crowdfund my Jura wine book project.

So why did they hand their money over for a book that doesn’t even exist yet? Why and how did I give them the opportunity to do it? And how does it work? I have received several questions from people intrigued and possibly wanting to emulate my ‘success’, so here is an attempt at some answers and observations from what I’ve learnt during the process, along with my personal advice for others considering launching a crowdfunding project.

Crowdfunding via the Internet
I discovered the crowd-funding concept a couple of years ago, when through the wine blogging and social media world I met film-maker, Zev Robinson and went to see a rather moving and thought-proving documentary film he had made about the Rioja wine region. He was already creating another film, this time about some untold stories of the Douro region in Portugal where port wine comes from, but he needed funds for the final stages of production. He decided partly to raise these funds through a project with Indiegogo, another crowdfunding website. When I looked at it on-line it seemed to me a perfect way to help him: I could pledge a certain amount of money and eventually I would receive the DVD of the film – effectively buying in advance. In fact I pledged slightly more than the required amount for receiving the DVD.

Fortunately Zev was able to do his project, despite not reaching his targeted amount but he was disappointed in the level of support. My view is that whereas this concept appears to be widely understood in the USA in particular, not enough people in Europe have come across the concept before – my hope is that this is changing.

It turns out that there are many websites today that come under the crowdfunding banner. When I first started looking with my own project in mind, Kickstarter was the most successful, but at that time it only allowed those with USA citizenship or a bank account there to create a project. I looked into Indiegogo and in fact attended a seminar given by them in London, but always preferred the look of Kickstarter. Fortunately for me, Kickstarter opened up for UK-based citizens (or anyone with a UK bank account) at the end of last year.

What Kickstarter Crowdfunding is and what it is not
There are other models and websites that operate differently such as crowdfunding sites for charities and for cultural projects, and in some countries tax may be deductible, but most of my observations from now on concern Kickstarter only. If you back a Kickstarter project (make a financial pledge), this is neither a charity donation, nor is it an investment.

For those considering launching a Kickstarter project, then consider whether you have a real tangible idea that a crowd of people will feel like they want to be part of by pledging their money. Note that Kickstarter is only open to ‘creators’ of specific projects with a product at the end of it, not for funding a change of life or for you to be able to pursue your dream. Hence why it is ideal for publishing projects, film projects, but also for inventions and for improvements/enhancements to existing businesses. I recently pledged a small amount to an artist to help her mount an exhibition in London – I do not know her personally, I was simply browsing on Kickstarter, but I would not have done this without the promise of a ‘Reward’ – a T shirt created by the artist.

Rewards and how to set them
The Rewards are what set these projects apart from charity fundraising or investment projects, and the choice and pricing of the awards is one of the crucial aspects for the success of a project. The idea is simple: depending on how much backers pledge to your project they are eligible to receive rewards.

In my case the most obvious and most popular reward was to receive a copy of the book on publication. I chose to include worldwide delivery as I knew the appeal of my project worldwide and did not want to put anyone off by adding a delivery charge, which one is allowed to do. But, in addition to an obvious reward of receiving the end project, it seems to be a good idea to involve people as much as possible, by including a personal thank you, and also to offer a few original rewards for higher amounts of money enabling you to reach your target more easily.

Costing issues
I found it difficult to plan the costing issues of setting the target and setting the level for Rewards. My aim was to make a sufficient amount of money to really contribute to the production of my book in a meaningful way. Indiegogo and Kickstarter differ in various ways, one of which is their commission systems depending on whether you reach your target. Kickstarter offers only one solution – all or nothing. You set a target amount to be raised and if you do not achieve that you receive nothing and the backers do not have their cards credited. They charge 5% + VAT commission, and there are credit card fees on top – in all depending on the average pledge levels, one has to expect to receive around 10% less than the target. Indiegogo allow you to choose between to commission structures, one works as the Kickstarter one, but with a lower fee, the other allows you to receive the money even if you do not reach the target but charge you 9% if you do not reach that target.

I preferred the Kickstarter argument that if you set the target right – which they recommend is at the minimum you need to both complete your project and fulfil your Rewards – then it makes little sense to contemplate doing your project if you do not receive enough funds. I can see how the Indiegogo system might work for certain projects though.

One problem is not knowing exactly how much each backer will pledge and which rewards they will chose. The higher rewards I created provide great cash flow, but cost more in time to fulfil – time that must be allocated for a future date. I was actually delighted that I reached my target of £7.5k without anyone pledging for the larger rewards (at that point the highest anyone had pledged was £100), which actually showed there was great interest in producing the book. For me this was a vital point of running this project – to gauge that there really was interest in this book.

Marketing the project
Many people think that being active on social media is the key to getting the pledges in for a project, and it is true that my large following on both Twitter and Facebook undoubtedly made a big difference, especially at the start when I launched the project. But sharing on these sites and others such as LinkedIn was not the only thing I did. In particular I wrote emails to a few people personally asking for their support in sharing the project with their networks, and eventually I sent a blanket email to a cobbled-together mailing list of around 400 people in my address book, ranging from friends and family to colleagues or customers who I have worked with over 20+ years.

I also kept an eye on important wine forums, in order to react if someone talked about my project. This happened on three forums and I was able to respond graciously to give more details. It is simply not acceptable to promote yourself on forums – that’s what social media is for!

I really used social media carefully, but frequently. I made sure that everyone who shared the fact that they had pledged received a public ‘retweet’ and thanks, and I did a regular search for key words in case I missed them. In addition several people were kind enough to write blog posts specifically about my project and Drinks Business wrote an internet news piece after I mentioned it on the phone to the editor whilst talking about an article I was writing.

Kickstarter encourage you to post updates on progress and some do these daily. I stuck to roughly once a week, or an update when I had reached a certain level and had news to share. Updates are also important to remind existing backers to share to their own network and to give something new to talk about in the on-going ‘sell’ of the project.

All of these many different things brought in people who pledged and shared. In all honesty I spent 30 days when about half of my day was spent hard-selling this project, something I’m not used to doing, but these became a real buzz as people did not seem to mind. I was really very grateful for both peoples’ support and for their forbearance with my persistent sales techniques!

So thank you all and look out next year for my Jura book!