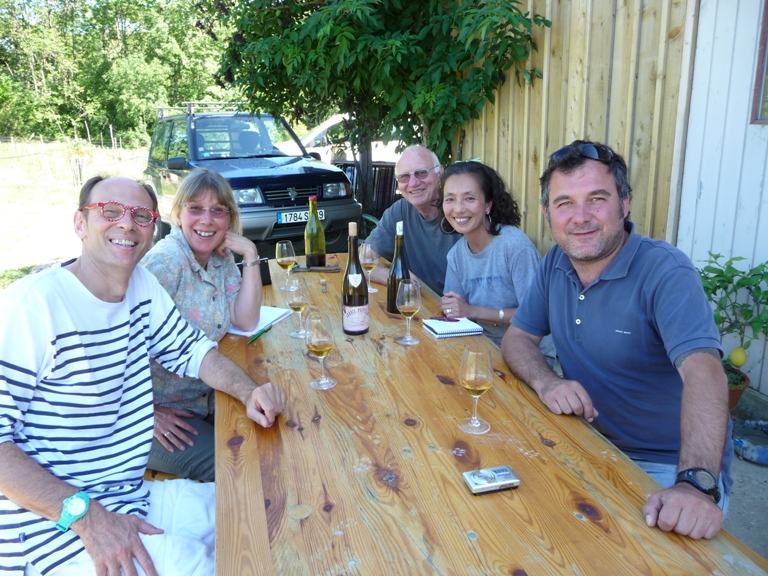 The more I visit, the more I find that as well as being beautiful and with a huge range of intriguing wines, the Jura wine region is full of great characters involved in different ways in wine. It has been a great pleasure getting to know these people over the years and their generosity in sharing information, stories and wine has been both useful and heart-warming.

This latest update highlights a few interesting encounters on a visit in August whose main purpose was to research the story of the 1774 bottle and Vin Jaune today for a forthcoming magazine article. Christophe Menozzi and the 1947
I’ve known sommelier Christophe Menozzi for several years since he ran a small hotel restaurant in Doucier that I visited a couple of times, and then later a restaurant in Besançon where we enjoyed a great meal too. A decade ago Christophe won a string of sommelier awards whilst he was still working in Switzerland including the Ruinart best sommelier of Suisse Romande in 1999, best sommelier of Jura Franche Comté in 2000 and Maitre Sommelier de France in 2001.

Passionate about his adopted region of the Jura, Christophe has helped my understanding of Jura wines greatly over the years, and today works as an independent wine educator, consultant and sommelier, though is frustrated about the slowness of some of the authorities and producers in the Jura about adopting some of his projects aimed to help the region. We had dinner with him at his home at the start of our visit to the Jura partly so that I could ask him some questions about my quest to understand the story of old Vin Jaune better. I happened to mention that I had actually tasted relatively few old wines of the Jura. Christophe disappeared into his cellar and emerged with a surprise, completely unplanned, not opened in advance, and not a Vin Jaune, but really a special wine, over 60 years old. A 1947 vintage at the kitchen table ©Brett Jones

Côtes du Jura white 1947 from Jean Bourdy was golden, with a slight amber tinge. The nose kept changing as time went on, firstly smelling a little of toast, then gradually becoming sweeter and more citrus in character. On the palate it was dry, but incredibly rich and even honeyed. It had such lovely length, quite extraordinary. For the record, Bourdy’s white today is Chardonnay (though not labelled), but back then there might have been a little Savagnin blended in. I learnt later that 1947 was considered to be one of the ten best vintages of the century … Thank you, Christophe!

Jean-François Bourdy and the 1781
We had a long and interesting visit with Jean-François Bourdy in Arlay at the end of the trip, so that I could get his take on the very old wines of the Jura – the Bourdys (currently the 15th generation) have the largest selection of old Jura vintages on sale, and keep meticulous records, as well as having built up an interesting museum of wine-related items and family heirlooms. Jean-François has evidence that wines have been kept back from sale in his family since the mid-18th century, and from the late 19th century (the 1896 vintage), his great-grandfather started the tradition of keeping back 100s of bottles of each style of wine made. They now have a stock of 30,000 bottles, changing the corks and topping up if required about every 50 or 60 years. At that time, of course they taste, so Jean-François has quite some experience of tasting liquid history. The oldest wine he has tasted was their 1781, tasted in 1998 with his father and grandfather. He told me that it was the greatest wine he had ever tasted, with both power and elegance and “l’equilibre absolu” (perfect balance).

Pierre Overnoy and the two 1991s
Considered one of the ‘fathers’ of natural wine, I don’t know the legendary Jura vigneron Pierre Overnoy very well (I think that would take many, many meetings), but each time I have met him has been a great experience. This time, I made the appointment specifically to discuss the 1774 wine, which I knew he had tasted. At 73 Pierre is retired in theory, his young friend (almost adopted son) Emmanuel Houillon having taken over his vines and winemaking. Despite this, he is still in great demand to meet, so I was not surprised to find that he had other guests when we arrived, as instructed, not at his house in Pupillin, but at the location of his bread oven in a nearby field!

A restaurateur from nearby town Dôle had brought along Alber and Tamae, a Spanish-Japanese/chef-sommelier couple from the Dos Palillos restaurant in Barcelona, and previously employed by  the famous (now closed) El Bulli. When we arrived, Pierre was in full flow, talking and offering a couple of wines to taste, and as usual everything he said was highly educational. I made a note: Pierre’s own mentor, Jules Chauvet, said that the quality in wine lies in the length on the palate. Of course it does! After a beautifully mineral and lemony, fabulously textured, recently bottled Savagnin 2005 (not oxidative, but topped up – Pierre was one of the first in the region to do this), Pierre turned up the heat with a little challenge, two wines blind, a red – Ploussard, of course, the grape of the village of Pupillin – and another white. We all failed miserably in this guessing game.

The Ploussard, which we tasted first, had a typically pale red colour, but the nose and the palate showed really ripe fruit, together with balanced acidity, and it seemed to me to be from a warm year. The finish was almost sweet, but with a dry, mineral edge (typical of no SO2, I find increasingly). I guessed 2003, how wrong could I be. We were shocked when he revealed the vintage to be the tiny frost-stricken 1991 vintage.

Onto the white and we thought that we were wising up to Pierre’s tricks, guessing older vintages, but whether it was Savagnin or Chardonnay, we couldn’t agree. This was real ‘orange wine’ but of the best sort. A golden colour, with a hint of green, a nose that was evolved and orange-like too, and orange peel even emerged on the dry palate that showed very high acidity. I thought it must be Savagnin and guessed 1982. Very wrong again! This wine, Pierre explained had very high volatile acidity and was aged for over 17 years in an oak barrel, but topped up (so not 100% of its vintage). It was Chardonnay 1991 – fascinating!

Incidentally, next time I must remember to catch up on my reading before visiting Pierre. It seems that 1991 is the vintage of choice for Pierre’s party tricks this year … see Alice Feiring’s blog, and  search for Overnoy for tales of two encounters… and to think that I could have shown off my ‘knowledge’!

Stéphane Tissot and the two 2004s With the 2003 vintage, Stéphane Tissot decided to launch two terroir-specific Arbois Vins Jaune alongside the standard blend. In August he gave me the 2004s to taste, En Spois (which is a steep east-facing vineyard on a young Triassic, quite rich soil) and Les Bruyères (a south-facing vineyard on which he also grows Chardonnay, which I’ve always enjoyed; the soil here is also the Triassic clay-rich soil but has the classic Jura blue marl below, ideal for Savagnin). We tasted them just opened, and also 2 bottles opened 24 hours previously. As Stéphane gave me two clavelins to taste at home, we have also been ‘testing’ these and due to circumstances, tasted them with a two week gap (in that time they were about three-quarters full, and kept in our quite cool cellar). These two wines are really very different. En Spois is very slightly darker in colour and delightful at first, with a lightly curried, nutty and creamy character with almost burnt candied citrus notes, with high acidity and alcohol well in balance even at 15.8%, rounded fruit and long, drinkable right away. The slightly paler, green-gold Bruyères is immediately more complex with more candied fruits and nuts, less curried notes. On the palate, this was somewhat harsh in acidity to begin with, complex yes, but crying out for ageing. Tasting after being open 24 hours, the En Spois was silky but elegant, the Bruyères unctuous and long; tasting after two weeks, the En Spois was showing marked oxidation, drinkable still, but better for the cooking pot, whereas the Bruyères had evolved into something fabulous, reminiscent of aged Amontillado Sherry, but crisper in acidity of course – this is the one that should age for a decade or probably much longer. Terroir-specific Vins Jaunes – a radical concept that Stéphane wants to do more of – he is such a passionate and ever-questing winemaker, and very good for the Jura to shake up ideas.

My Jura friends, thank you all for sharing and I look forward to more experiences soon.