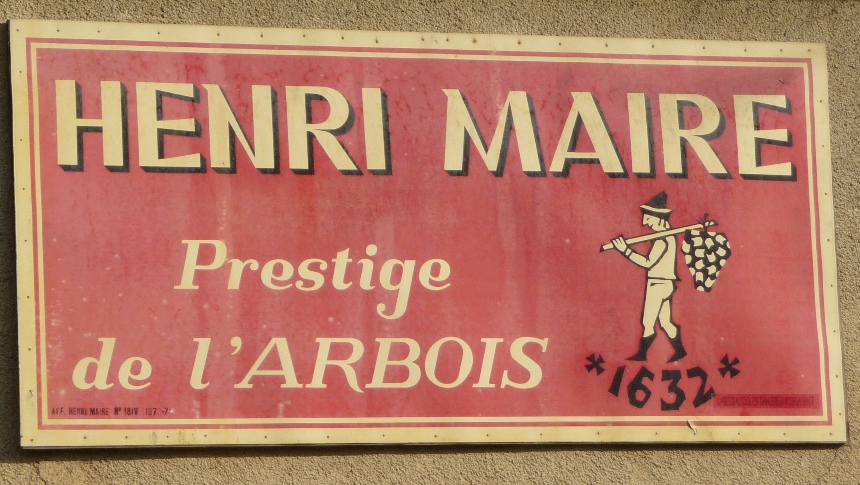 After my first update with the big news about the Jura wine region, this second one focuses more on what is important within the region, developments that potentially affect hundreds of people. In the spirit of the defunct Wine Report, I have also included a short summary of recent vintages, and an opinion piece with an update on producers. Henri Maire struggles
In what was seen by many as a sad occasion for Arbois and for the Jura wine world, after several years of financial problems, the family of Henri Maire (who died in 2003) sold the company in June 2010 to Verdoso, a Luxembourg-based investment firm.

To any wine lover, the most valuable assets of the company would seem to be its 300 hectares of vineyards and its extensive stocks of old Vin Jaune (both in bottle and in barrel, but the latter not stored in the best of conditions). The purchaser is a company with no experience of the wine business who bought it apparently for its vertical direct sales network. Signs a year after the sale were not good, with sales figures continuing to plummet, redundancies, the unexpected sale of the highly successful, large Arbois restaurant La Finette (a good showcase for the wines, established by Henri Maire 50 years ago). In addition 14 hectares of vineyards have been put up for sale. A small turnaround in sales has recently been reported, and the firm continues to recruit new sales staff.

One other small positive sign: in June this year, a new technical director joined the company, Emmanuel Laurent (ex-Antonin Rodet of Burgundy), so maybe there is some hope of quality improvements for vintage 2011. The quintessential Deux Tonneaux shop remains open in the centre of Arbois for consumers to taste and to be sold to…

Wine Tourism develops slowly
In 2009 the Route du Vin des Vins du Jura won one of the first French national wine tourism awards. The route is well signed, has good publications and maps, plus a reasonable website, although the English version does not seem to have been kept up-to-date. Winning awards is all very well, but the reality is somewhat different. I struggle to keep my own two guides to the Jura wine region on Wine Travel Guides up-to-date, especially with random restaurant closing days. On a visit last month, we were regularly confronted with restaurants closed on unexpected days, and that was in the middle of the peak tourist season in August. As to wine producers welcoming visitors, well the small ones are still reluctant to open their doors to tourists, citing lack of time, staff and facilities. Whatever it says in the Route du Vin’s brochure about opening times, if you arrive without an appointment, you may be disappointed, and arrive to find a little sign on the locked door (in French of course) with a mobile phone number if you are lucky.

However, the choice of lodgings is improving, with some really pleasant chambres d’hôtes (Bed & Breakfasts) opening up in the heart of the vineyard areas. The centre of the wine region, the small wine town of Arbois, is certainly better and better each time I visit, in terms of restaurants, food shops and tourist activities.

With all the buzz going on about Jura wines, especially in the USA, it does seem to be that there may be a market for me to plan and lead some very focussed wine tours for professionals and serious amateurs. I do not wish to set up tour company, but if you are interested in me guiding you around this fascinating region that I now know so well, please get in touch. Recent Vintages – a Summary
2008: Localised hail damage, especially in Arbois, and a miserable summer took their toll especially on reds, where selection needed to be rigorous. However, the weather improved at the end of August and early September was  fine. Overall, somewhat mixed, but decent white wines in particular.

2009: The season was initially not easy, with poor conditions at flowering, however, in August everything improved and results were excellent after several weeks of sunshine leading up to harvest. Quantity was down, a particular concern for the successful category of Crémants du Jura, but quality is high in all varieties and styles, with the only criticism being sometimes too much richness and a lack of characteristic acidity.

2010: Somewhat similar to 2008, with disease pressure in much of summer, especially for red varieties, but yet again, the vintage was saved by a good autumn. Chardonnays are particularly well balanced, and the reds are good, when growers were selective. The later harvested Savagnin suffered a little.

2011 Prospects: After the early spring, everyone was worried about frost, but it stayed warm, with an early and dry flowering leading to forecasts of harvest 3-4 weeks ahead of normal and possible drought. July was cold and wet, slowing things down a little, and during a slightly variable August diseases seem to have been held pretty well held in check, with it getting warmer as the month went on. Nevertheless harvest remains the earliest since 2003 starting for grapes used for Crémant from 24th August and others from 29th August: postings I’ve seen since have all seemed quite upbeat, time will tell…

An Opinion and update on producers
The buzz around social media focuses around the many fine organic producers of the Jura (discussed in part 1 of this update), plus a couple of others, not certified organic, notably Jacques Puffeney and Domaine Montbourgeau who, imported by Neil Rosenthal, have been the most established Jura producers present in the USA market. Yet, let’s be realistic about this. As in most of the wine world, there are many seriously good producers of wine in the Jura, who I feel confident ‘care’ about the environment they live and work in, but who have chosen not to take the organic route, or at least not organic certification, allowing them a certain leeway in difficult years. The Jura region has a strong willingness to adopt sustainable practices – regional bodies are actively encouraging change, however, this does not mean it is realistic for everyone to convert to organics right now. Recent non-organic Jura wines I have enjoyed include Arbois Savagnin 1987 from Jacques Tissot, bottled after 15 years in large oak foudres, but not like a Vin Jaune at all, fresher and less spicy, and with tremendous depth; Arbois Trousseau 2004 from Daniel Dugois, with that classic hard crunchy red fruit edge, that worked perfectly with pork in mushroom sauce; and then on a very fast visit to Jean-Michel Petit of Domaine de la Renardière we tried their delicious Les Terrasses (Savagnin Ouillée) 2009 and the Vendanges Oublié (late picked non-oxidative Chardonnay/Savagnin). A tasting at Domaine Baud in Le Vernois a while back showed excellent consistency. Producers like Lucien Aviet (known as Bacchus) in Montigny, Philippe Butin in Le Vernois and Château d’Arlay in Arlay are not organic as far as I know, yet their wines are redolent of terroir, and most especially their Vins Jaunes are fabulous; the legendary Domaine Macle in Château-Chalon is one who is not certified organic, fitting into that category of usually organic. The wonderful Chardonnays from Domaines Labet (father Alain and son Julien, with separate estates, though Julien makes the wine for Alain) have always been from sustainable vineyards, only slipping from being organic in certain years – they are amongst my favourites. I’ve heard they are now on the official route to organic certification and wish them luck.

Many young vignerons are setting up, adopting the organic route right away and some are failing, because it is just one more difficult aspect they have to address. Others like Julien Mareschal and Rémi Treuvey (who I wrote about in Wine Report 2006), struggle to keep their heads above water in the non-organic world too. Sadly, the latter is said to be ceasing to make his own wine. Let’s face it, it is not easy being a wine producer anywhere, and the Jura with its very unpredictable weather and heavy soils has emerged as a surprising region to be so focussed on organics. When I asked Jean-François Bourdy of Demeter-certified Caves Jean Bourdy in Arlay recently if the domaine followed the phases of the moon for their biodynamic practices, he answered that yes for some things they do, but with their heavy soils and unreliable weather, the moon be damned, they would work the soil when they needed to – when not too wet and not too dry. For the record, he also told me that never, ever, would they dream of bottling a wine with zero sulphur, but don’t get me started on that.

Still to come in Part 3 in early October: Experiencing a very old Jura wine, a museum and an interesting encounter with Pierre Overnoy.