A couple of weekends ago, we had a wonderful evening at my favourite restaurant in the mountains. After a nightmare day when my website had myriad problems, I was never so relieved to be going out for the evening with friends to Chez Albert as on that evening.

I’m proud of being a regular (well at the very least once per winter season and once per summer season for 15 years surely makes me a regular?) at La Ferme de Lormay, driving ten minutes down from my chalet into Le Grand Bornand and then 10 minutes along a wonderful valley almost to the end to reach it. In fact, I can claim credit for encouraging an American journalist to write an article about it in the New York Times ten years ago! It’s changed almost not a jot in the decade since the article was written.

It’s hard to explain Chez Albert, but I’ll try. The restaurant takes up the ground floor of an old traditional farmhouse and the middle room where you enter has a huge chimney with hams and saucissons hanging down, home-smoked by the open fire, which is used to grill meat. Also in this room the desserts (all home-produced tarts) are laid out so that you can check them out before you start eating. A couple of small tables may be occupied by diners here. The kitchen is off this room and then either side are two further rooms with wooden tables and uncomfortable narrow chairs (but so much is going on, you only notice the discomfort after 3 hours, in my estimation!) laid out in different formats according to the reservations. Every visit is different! Decoration is limited to traditional and homely objects – nothing twee here.

You are welcomed with a refreshing glass of Savoie Jongieux from Eugène Carrel (this wine has always been the welcome aperitif) whilst you peruse the menu, which has a simple listing of starters and main courses (no fixed-price menus). Owner and chef Albert somehow manages to combine cooking skills learned in fine Lyon and Annecy restaurants with a feel for local traditional cuisine unlike any other local chef I know. Starters include charcuterie, Salade d’Alpage (with 2-hour old Reblochon cheese from the next door farm and potatoes), a stunning cold leek dish in a beetroot sauce, mushroom terrine and in summer a fabulous courgette mousse, which I enjoyed on this evening. Main courses include grilled hunks of beef or lamb, but mainly feature local meat dishes including the fabulously rich, blood-thickened Fricassé de Caion (a Savoyard word for pork), Atriaux (fagots) and Boudin (blood sausage). In summer, chicken with crayfish (an unusual surf and turf combination) plus two trout dishes are offered. This visit I chose the classic Truite au Bleu, where freshly caught trout is simply poached in a vegetable bouillon, which is then thickened with a little cream for a sauce. Side dishes are always the same – gratin Savoyard and polenta (a traditional Savoie dish, not Italian as most people think … much of northern Italy including Turin was part of the Duchy of Savoie for many years). You might be offered a treat of aubergine (in summer) or cardoons (winter) on the side, but don’t count on it! In addition there is usually one special main course of the night – often game in winter.

The cheese plateau is local, of course, and of the highest quality but I rarely have space for it. A fabulous alternative is the finest fromage blanc I’ve eaten anywhere – served with classic local blueberries. But then, there are the desserts. André, Albert’s partner, usually invites all the table to go up and choose, and then offers to give you a small slice of each of the tarts or any combination you want, served with sublime ice cream (usually vanilla and one other – banana if you are lucky). Coffee and tea are served beautifully with a little plate of the most delicious Proustian madeleines – somehow a space is found for a couple. 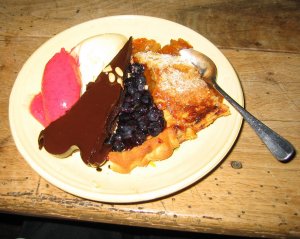 As for the wines, well, it was on my early visits to the Ferme de Lormay that I learned who the good Savoie vignerons were – ones like Magnin, Michel Grisard, Trosset and André & Michel Quenard who feature today on Wine Travel Guides and in other articles I write on Savoie. The list is simply divided into Vins d’Ici (Wines from Here i.e. Savoie) and Vins d’Ailleurs (Wines from Elsewhere) and they are very well chosen, all collected from or delivered directly by the producers as in all good restaurants in France, rather than through a wholesaler.

The long, usually noisy evening always ends up with a visit from Albert himself, clutching a carrier with six rather strange looking bottles. This is the Gnôle – or the spirits selection, rather suspect ‘home-made’ bottlings of Génépi, Poire, Prune and other fruity and fiery delights – the pièce de resistance being ‘Le Vipère’ – the snake in the bottle. What spirit is it in? Well, usually it’s apple, but as Albert once explained “it doesn’t make any difference – the snake gives it it’s own taste”!

On leaving the restaurant, somehow there always seems to be the most spectacular display of stars in the sky that I’ve seen anywhere … we are at the end of a valley here, with very little other light. Breathing in the fresh mountain air and getting a crick in the neck looking up at them is part of the ritual for me before going back along the valley and up the other side to bed.

Update October 2008! A devastating rumour reaches my ears that La Ferme de Lormay closed for good at the end of the summer season – I hope it’s not true … just in case I’m leaving in the details below.

To plan your own wine tour in Savoie, do subscribe to my website using the special discount code D1BLG08.

UPDATE 2009/2010: Albert continues to run the Ferme de Lormay restaurant in cut-down form (maximum around 20 covers) with just him both in the kitchen and serving. The food is just as wonderful, but it’s up to you create the ambiance.